I’ve seen a few retweets about a 17 March article in University World News called “Open science in the EU—Will the astroturfers take over?”, and my first thought was that it must be a mistake because pro-copyright organizations in the EU have recently been using the term “astroturf” to talk about organizations that are funded by US technology companies to oppose copyright.  However, the UWN article, which appears to operate without any sense of irony at all, decries publisher trade associations’ pro-copyright advocacy (with a quote from Jon Tennant on “corrupt” policy processes) while commending an “open letter” from a number of organizations in the library and research agency space, which also include several of those anti-copyright organizations that deem themselves to be protectors of the “public domain”— such as Communia and C4C—which explicitly note that their primary mission is public policy advocacy.

Advocacy in the EU is somewhat different from advocacy in the US—in the EU, advocacy by individual companies (publishers or technologists) is frowned on, but comment and perspective is certainly welcomed from trade associations, industry groups, and organizations of all kinds.  I don’t see corruption in any of this. What I have observed in the DSM process so far is a robust exchange of differing proposals and ideas, from the Commission itself, from Parliamentary committees, from Member States, and from industry and advocacy organizations.  I have seen proposals that I think are idiotic (gratis commercial TDM rights, as mentioned in my last post), and others that I think are positive (more responsibility on the part of web sites and platforms for unauthorized postings).  I commend the Commission in its work of trying to strengthen a European online market, which in my view has suffered from a huge “value gap” (see the October 2017 statement from the European Authors’ Societies) between technology platforms that build commercial services using the work of others, and authors and publishers.  I was on a panel on this topic in 2016 at the University of Amsterdam. 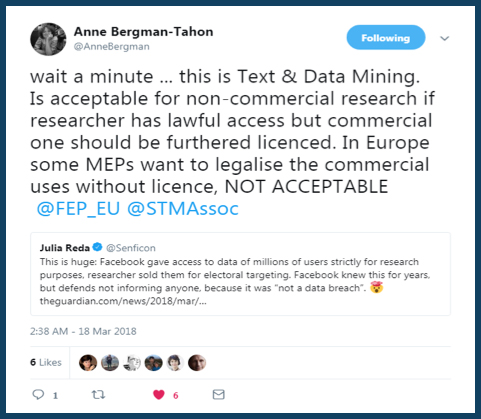 The recently released report from the Campaign for Accountability about Google influencing the European debate through massive funding of research organizations is also highly relevant in this discussion about advocacy—this is advocacy and policy influencing at a mass scale, something that probably only well-funded technical organizations can do.

Putting irony aside, let’s look at the primary topic of the article, the request for proposals for an Open Access platform for data and publications, which will start up at the end of March 2018.  The article adds to the old lie about publishers intending to “undermine science” and engaging in a “blocking role”, with specific references to my former company Elsevier and the DEAL negotiations in Germany.  The facts are quite clear that commercial publishers are publishing a huge amount under the OA model now, and that the uptake in the model is increasing enormously— as shown in a recent PeerJ article (“The State of OA: A large-scale analysis of the prevalence and impact of Open Access articles” by Piowar, Priem et al.) posted as a pre-print in February 2018. 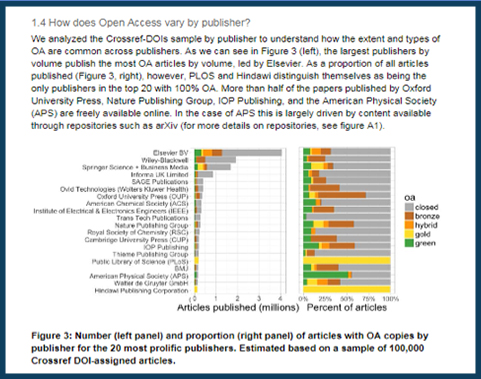 The PeerJ preprint shows very significant OA growth by commercial publishers Elsevier and Springer Nature.  I’m not sure how the views of Green OA impact the overall article, but the graphic rather nicely demonstrates the fallacy of saying that commercial publishers, and Elsevier specifically, are against OA publishing (important to remember that the EU 2020 OA discussion document has a broad definition of OA which includes publishing in “hybrid” OA journals).

The University World News article goes on to discuss how odd it would be if an established journal publisher would submit a bid for the 2020 platform project, and how strange it would be if such a publisher were to be accepted for the project.  This is described by the LERU secretary general Kurt Deketelaere as being a “quite crazy” idea.  In fact I think it would make a huge amount of sense if an established publisher were selected to develop and operate the platform, which is described in the December 2017 Information Note as requiring high quality scientific publishing, technical implementation, professional publication process management, plus communication, take-up and sustainability.  Existing publishers, commercial and non-commercial, should be the clear front-runners in such a bidding process.  I’m reminded of Kent Anderson’s Scholarly Kitchen post on the value that journal publishers bring to scholarly communication (the February 2018 update of “102 things that Journal publishers do”)—existing publishers of all stripes are uniquely qualified to make such a platform work.

There is a separate policy question as to whether the 2020 platform project is a sensible use of EU taxpayer funds.  It appears to intend to compete with existing journals and existing journal platforms, as if the existing journals and platforms are not doing enough on the OA path—or need to be instructed about how to engage users and research communities (again see the SK “102 things” post).  It is not clear to me why another platform, essentially another mega-journal, will push EU OA towards its 2020 goal more effectively than simply using the methods outlined already by the Commission in funding research grants, as outlined by the STM association in its 2017 update on the framework issue.  But putting that aside, if the Research & Innovation directorate want professional competent publishing for the new platform, choosing an existing successful publisher would be smart policy.