In addition to discussions on OA and Transformative Agreements, I was happy to join a CCC panel to discuss the next steps in the European digital copyright agenda, the DSM, which attracted controversy and communication cascades last winter and spring before final passage in the European Parliament in May 2019. Much of that controversy was around the question of greater technology platform responsibility for content and copyright compliance—which was often equated in that debate with censorship. The DSM sound up being about far more than Articles 11 and 13 (which wound up being Articles 15 and 17), the news publishers right and platform compliance, as one would expect of a significant review and rewrite of digital copyright rules that have in Europe been largely unchanged since the Information Society directive of 2001. The infographic below notes a whole host of issues, from copyright exceptions to contract law and collective licensing. 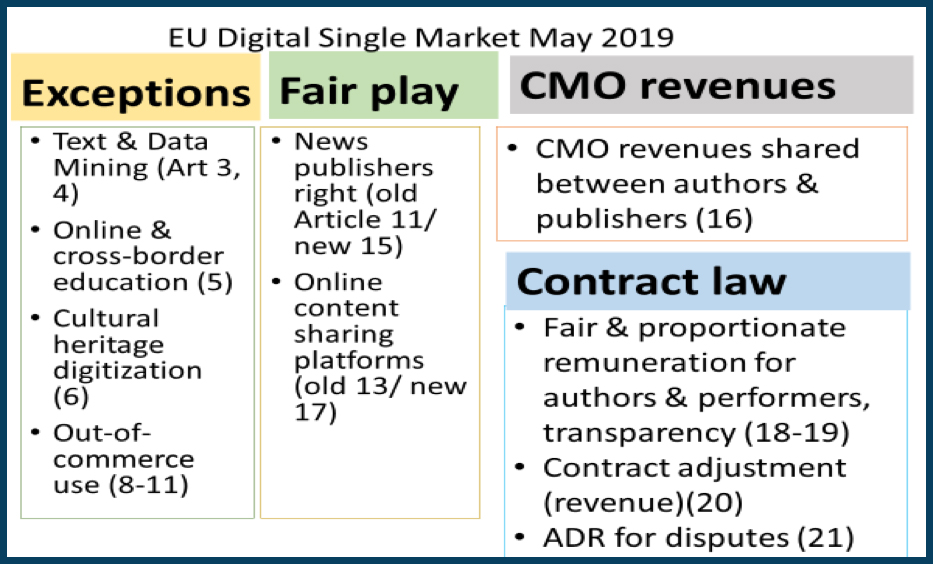 The CCC panel at the Book Fair included Elizabeth Crossick, a former colleague of mine from  RELX Government Affairs, and Carlo Scollo Lavizzari, counsel at the Len Caemmerer firm and of counsel to the STM Association, and it was a pleasure to be working with Elizabeth and Carlo with Chris Kenneally of the CCC as moderator.

Elizabeth outlined the background to the DSM proposals, noting that developing a single market means having clearer exceptions and rights across the EU, something that the prior directive did not deal with adequately. Carlo noted that some DSM elements were included to  address issues that had odd case law developments in recent years (such as collective licensing remuneration for both publishers and authors), then addressed the implementation process across the EU, given that the directive must be implemented into local national law across the EU. France has begun the implementation on the news publishers right already, and considerable discussion already in Germany. Publishers Weekly covered the panel in a report that can be found here  https://www.publishersweekly.com/pw/by-topic/international/Frankfurt-Book-Fair/article/81481-frankfurt-book-fair-2019-stage-two-for-europe-s-copyright-update.html. 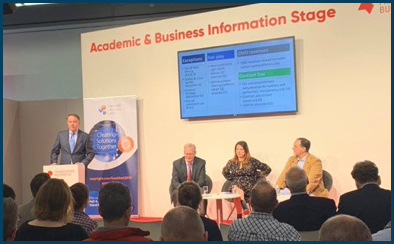 My role in the panel was to talk about the US approach on technology platforms “safe harbor” under both the Communications Decency Act (section 230) and the DMCA (section 512), and concerns on the part of the international rightsholder community about how these safe harbors have encouraged the technology companies to resist working with rightsholders to identify non-compliant copyright postings. These US principles were put into place in the 1990’s, and come out of the notion that telecommunications companies are mere “pipelines” and conduits.

What is clear now in the world of almost 2020 is that tech platforms build whole businesses around content, and yet the “safe harbor” concepts continue to be pushed by the platforms, even more recently around “fake news” and political manipulation of social media. The platforms internationalize this approach through their online terms and conditions. The provisions of Article 17 (and Article 15) will be a test to see whether government, rightsholders and technology platforms can agree on common-sense rules around licensing of content and copyright compliance.

The panel concluded with a discussion around continuing uncertainties—how differing national implementations of the DSM directive will need to be monitored—what the impact of Brexit will be—and the degree of willingness to compromise and negotiate. I wanted to also recognize the BeyondTheBook podcast done by Roy Kaufman, MD of business development and government relations at CCC https://beyondthebookcast.com/frankfurt-preview-the-directive-on-copyright/ which summarized much of the background and identified many of those upcoming questions.