There are current proposals to significantly amend copyright laws in a number of countries and regions around the world, but probably the most active and most likely to proceed is the Digital Single Market (“DSM”) initiative in the EU. In 2016 The Commission identified the key objectives of the initiative, first to establish a broader and consistent approach to copyright rules across the EU, second for clearer digital exceptions for education, research, archiving and accessibility (visually impaired accessibility as contemplated under the Marrakesh Treaty), and third ‘fairer rules’ for the online marketplace to support creators and creativity. 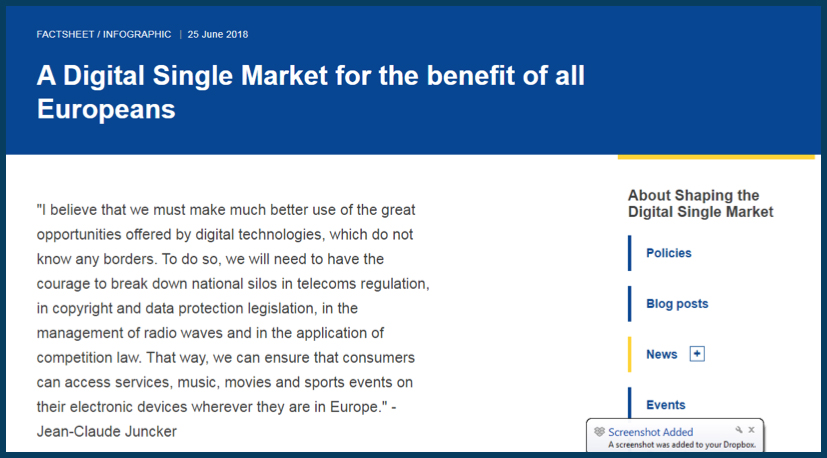 This summer had/has two important DSM bookends to it. First, the European Parliament on 5 July rejected the position recommended by the Committee on Legal Affairs (“JURI”). This was deemed a good result by some interest groups, many of which had strong ties to US technology interests and pro-usage organizations such as Creative Commons. Now in September we wait for the open discussion and possible redrafting or amendments of the draft in the European Parliament, with an important vote possible on Wednesday, 12 September.

Advocacy in June against the JURI proposal generated more expressions of concern about the text, allegations that ‘link-taxing’ were being included and that there were not not enough exceptions (particularly for commercial text & data mining), than the creative and rightsholder organizations appeared to generate in support (notwithstanding a well-coordinated campaign with presentations by authors and musicians). The Financial Times carried an interesting report in June 2018 about Google’s objectives and methods in its attempt to encourage its news partners to lobby against the JURI draft, which seems ironic given that the text would have given those news publishers greater negotiating strength by providing a new ‘publisher’s right’ (in Article 11). Creator and rightsholder organizations and advocates have raised questions about the validity of tech-organized “spamming” programs which they say generated hundreds of thousands of spurious email communications to MEPs just prior to the vote, as  chronicled by Volker Rieck, a German copyright enforcement executive, in the Frankfurter Allgemeine on 18 August (“Anatomy of a Hack”). Over the summer additional “activist” activities and sparsely-attended rallies aimed at stopping the directive took place, much of which seemed similarly dubious, as described by Stefan Herwig in The Trichordist.  Some of these hyperbolic activities and communications are continuing in the days before the September vote, witness the comments below from Anne Bergman-Tahon (Director of the Federation of European Publishers) who felt she needed to clarify comments from Communia about the education exceptions. 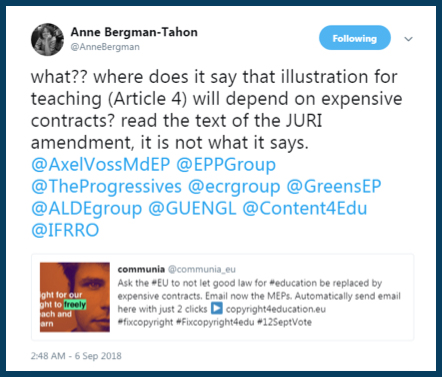 It should not be a surprise that major copyright revision proposals excite controversy and debate, or that this debate plays out on social media as orchestrated by various stakeholder groups (including some rather new ones!), on Wikipedia, and the like.  As former US Register of Copyrights Maria Pallante (and now President of the Association of American Publishers) noted in her 2013 article “The Next Great Copyright Act”:

“…[the P]rimary challenge [for the legislature] will be keeping the public interest in the forefront… including how to define the public interest and who may speak for it… Not since the industrial revolution has there been a force like the Internet, and it has changed both the creation and dissemination of authorship. The copyright world, which once had predictable and even pristine demaracations, has morphed dramatically.”

In 2017, MEP Axel Voss, then member of JURI (now the chief reporter for the Committee) said of the 2017 DSM report and proposal, describing the ambition and scope for DSM:

“The report states key aspects fully in line with our opinion about the way Europe should deal with platforms: clarify platforms’ responsibility so that no regulatory frameworks are bypassed because of the digital nature of their activities, and further enforce and protect copyright and intellectual property rights online. This should be translated in encouraging the transfer of value towards rights holders for the exploitation of the works online, and in proceeding to a revision of the Intellectual Property Rights Enforcement (IPRE) Directive to strengthen the fight against counterfeiting online, ensure fair competition and practices in the platform economy, both for B2B and B2C, and promote the emergence of European players in the field.”

Big and sweeping revisions of such important laws will necessitate debate, discussion and likely compromise. After all, these laws govern the creation and use of content that consumers, educators and researchers value highly and consider critical to their learning, enjoyment and work, as well as the operation, functioning and responsibility of Internet actors. This Saturday’s edition of The Economist, in talking about tech platforms taking greater responsibility for the parsing of “fake” news and the question of neutrality, suggested that on one hand platforms do not need current safe harbor protections, while noting that the platforms are taking greater responsibility directly and suggesting that further requirements might disfavor small potential Internet disruptors, who might not be able to afford some of the costs of greater responsibility and engagement. One can argue that the article should have noted the DSM proposals around the publisher’s right for news media, which would be one way of supporting more neutral and fact-based reporting (especially considering that the platforms often feature and copy from EU media sources), but the article does show that reasonably informed discussions about benefits and concerns are possible when thinking about Internet regulation. Compromises will come out of informed trade-offs between such benefits and concerns, provided the discussion is properly informed and respectful of legitimate stakeholder input.

Going back to Maria Pallante’s 2013 article, she notes that major copyright revision efforts require “clear and forward-thinking set of goals, and a sustained commitment from [the legislature…since] amending the law eventually comes down to the negotiation of complex and sometimes arcane provisions…”  On 12 September, the European Parliament will need to consider how all the proposals and recent suggested amendments fit into the key goals outlined in 2016—which were an attempt to trade-off greater platform responsibility on one hand with specific new exceptions and limitations.